They say men are from Mars and women from Venus…but have you looked up at the night sky……there is a sneaky little planet moving in on Mars lady. 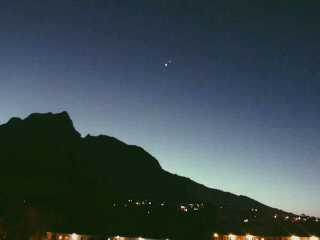 A scene from Cape Town tonight,like two lovers in the night sky the two brightest stars (after the moon and the sun) in the evening sky will ‘collide’…ok not literally, on 30 June /1 July we will be able to see Jupiter-Venus in alignment.

It’s actually interesting that I attended a talk recently on the galaxy there was mention of the Earth colliding with Andromeda in +- 4 billion years….ofcourse I won’t be around to see that unless I’m Superman.

Lucky for me I’m Batman the Dark Knight ….with darkness comes an amazing opportunity to see something ‘jaw-dropping’ so stop for just a few seconds and look up at the stars….

..another fun fact there will be two full moons in July.

If she asks you to take her to the stars tomorrow night will be the perfect opportunity – Thank me later.