Nani scoring after 5 minutes, the USA came back to make it 2 – 1 this would’ve meant another early exit for Ronaldo and the boys but Silvestre Varela scored a last-gasp equaliser as Portugal forced a 2-2 draw with the USA for their 1st point of the tournament.

It is still all to play for as we go into the final group matches, all depends on the result in the game between USA vs Germany a draw would mean both Ghana and Portugal would be out.

Day 13 saw the start of the final games in the group stages with both games in group B kicking off at the same time all eyes were on the Netherlands to see how far they could take their goal tally in the tournament so far, they certainly did not disappoint with a 2 – 0 win over Chile.

Netherlands were twice losing finalist against Germany and Spain respectively, will this year be third time lucky. With the mixture of youth and experienced players they are looking dangerous with ‘old man’ Kuyt getting on the scoresheet against Chile.

It was a game of pride with both Australia and Spain looking for their first points in this years tournament.

With 7 changes to the Spanish starting line up, I said in my last post that the Spanish bench looks like another first team and this showed as they looked like the Spanish team we all love putting 3 goals past the Socceroos.

Villa, Torres and Mata with the goals. It was Villa’s last match as he retires as Spain’s record scorer with 56 goals. I guess it doesn’t MATA though as both teams are out.

Now our focus turns to Group A to see who will play Netherlands and Chile in the round of 16.

With Cameroon having nothing to play for, already being eliminated they certainly did not come into this game lying down. After their messy last game the indomitable lions needed to restore some African pride but the Brazilian wonder boy was too much for them scoring 2 beautiful goals.

The Estádio Nacional Mané Garrincha in Brazilia was a sea of yellow, it looked like the only Cameroon support came from their substitute bench.

“@davidkibuuka: The only supporters Cameroon have in this stadium are their players on the bench #BrazilvsCameroon” 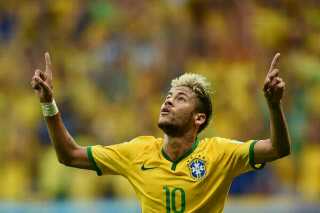 It was Brazil’s 100 World Cup game and who better to score the 100 goal of this years tournament than Neymar with the whole nation’s hope on his shoulder he is certianly living up to that expectation.

Joel Matip leveled things up after Neymar’s fisrt goal making it 1-1 , scoring his first international goal silencing the Brazilian fans, if only for a few minutes though as Neymar scored his second goal.

The second half saw Fred finally getting on the scoresheet at this tournament. Fernandinho coming on as a substitute and putting the cherry on top with a 84th minute goal to make the final score 4-1 and Brazil top group A

The Croatia vs Mexico game looked like it was not living up to expectation with a tense first half, no one breaking the deadlock as the score ended 0-0, if it stayed that way it would favour the Mexicans.

The second half was more entertaining though as Mexico scored 3 goals in 11 minutes with the United man Chicharito getting on the scoresheet after coming on as a super sub, making that the 6th United player to score at this World Cup.

Croatia managed to pull a goal back though in the 87th minute but then had a player sent off after a reckless challange this did not matter though as Brazil and Mexico go through to the last 16 to meet Chile and Netherlands respectively.